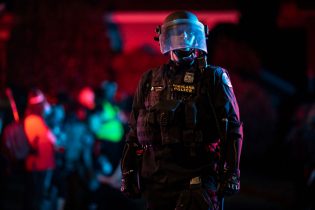 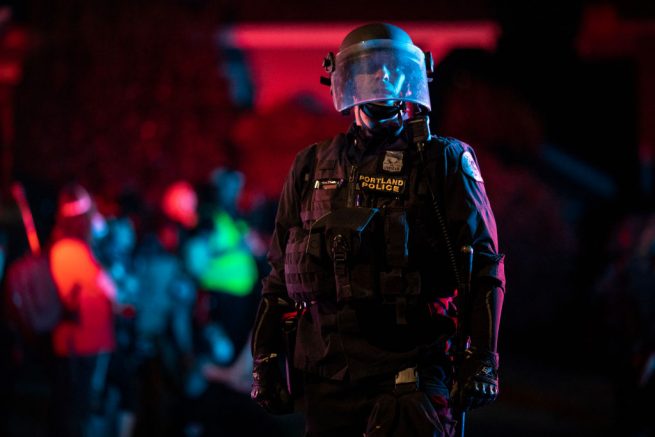 Portland police are seen in riot gear during a standoff with protesters in Portland, Oregon. (Photo by Paula Bronstein/Getty Images)

Several Antifa activists are under arrest after an evening of destruction in downtown Portland.

According to reports on Thursday, Antifa groups were called to action Wednesday and were ordered to attack “symbols and structures of colonialism and capitalism.”

This led to a rash of vandalism, which targeted several downtown businesses as well as the toppling and defacing of a veterans war memorial in a local cemetery.

“Fu** USA” graffitied on the base of a statue that was toppled in Lone Fir Cemetery sometime this morning. The statue was erected in 1902, in honor of Indian, Spanish-American, Mexican, and Civil War Veterans. #PDX #Portland pic.twitter.com/iOy7T2vD7z

Reports also said at least 10 businesses, including a grocery store that openly supports the BLM movement, were damaged.

Social justice-themed upscale supermarket @newseasons (on Hawthorne) was smashed up and vandalized by antifa black bloc in Portland overnight. They have messages in support of BLM all over but that did not protect them. #PortlandRiots pic.twitter.com/2CDKekjYca

“We’ve got so much on our plates,” Portland resident Kevin Gibson stated. “And then to come out on Thanksgiving day and see this is, it’s deflating, but we gotta move on. It’s been tough to see the area degrade like this.”

Police announced the felony arrests of three in connection to the attacks. At least one person carrying a pistol could face weapons charges, as well.

The vandalism remains under investigation and police said they hope to identify more suspects.

Rep. Waltz warns Taliban is growing into a terrorist super-state