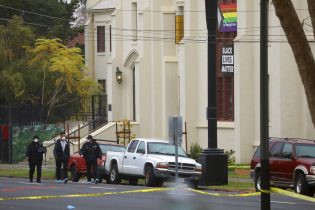 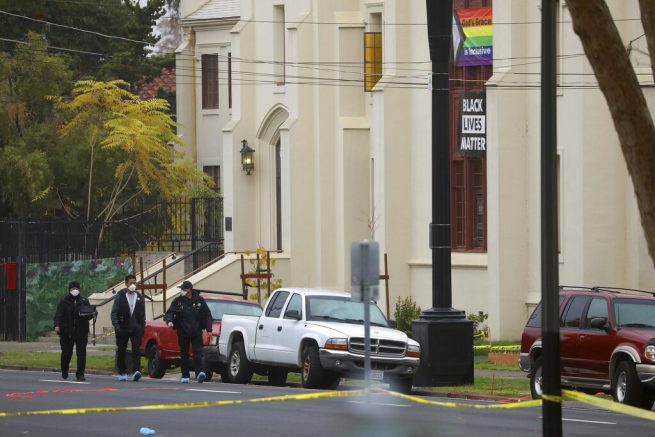 Members of the San Jose Police Department investigate a homicide scene at Grace Baptist Church on Monday, Nov. 23, 2020, in San Jose, Calif. Two people died and multiple others were injured in a stabbing Sunday night at the church, where homeless people had been brought to shelter from the cold weather, police said. (Aric Crabb/Bay Area News Group via AP)

U.S. Immigration and Customs Enforcement (ICE) officials said a homeless man arrested in connection with a pair of fatal stabbings at a Northern California church is an illegal immigrant with an extensive criminal background.

Authorities said his criminal history includes convictions for battery of an officer, assault with a deadly weapon and vandalism. He was also previously deported three times, but protected by local sanctuary laws.

The mayor of San Jose, Sam Liccardo, slammed the county’s sanctuary policies by pointing out they allowed Lopez-Garcia to be released despite prior convictions.

“In this case, I’m told the county received an ICE detainer arrest, but did not notify ICE of the defendant’s release,” explained the mayor. “He should have been in jail, in federal custody, in drug treatment or in jail in his own country, but not on the streets in our community.”

Today’s update focuses on Sunday’s incident & why it’s critical for the county to follow the California Values Act & notifying ICE if an undocumented offender w/ a record of violence + serious prior convictions are released. More: https://t.co/Cfe5mTzIZX. https://t.co/XujNVq3mnO

Lopez-Garcia is being charged with two counts of murder, three counts of attempted murder and battery.