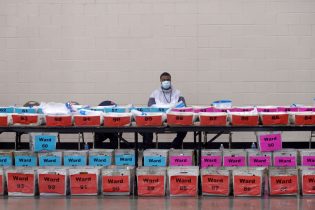 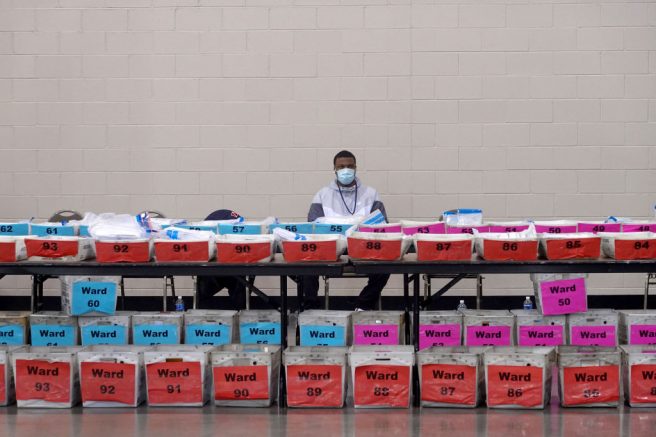 MILWAUKEE, WISCONSIN – NOVEMBER 20: Election officials wait as procedural issues are argued during the process of recounting ballots from the November 3 election at the Wisconsin Center on November 20, 2020 in Milwaukee, Wisconsin. (Photo by Scott Olson/Getty Images)

Election officials in Milwaukee found an uncounted batch of 386 ballots during the ongoing election audit in Wisconsin.

According to reports, the unopened ballots were found in the city’s South side ward. Friday marked the first day of Milwaukee’s recount and reports detailed questionable behavior by election officials.

All 386 of the absentee ballots that are now being counted were received by Election Day, City of Milwaukee elections head Claire Woodall-Vogg says. pic.twitter.com/BVkyt2XKSu

For example, poll workers were spotted wearing inappropriate wristbands, which raised concerns over how seriously they were taking the recount.

“I always thought it was chocolate ice cream, personally,” Milwaukee County Clerk George Christenson said of the emojis on the bracelets. “Wisconsin Center is our vendor who handles all of the logistics…they are probably just pulling what they have in stock because this is the first opportunity they’ve had to be open in quite some time through this pandemic.”

Christenson reiterated that the bracelets were a non-issue.

The recount has already drawn criticism as it remains unclear if officials would clearly identify invalid ballots that were originally counted towards the final tally.

Sen. Manchin criticizes White House for not notifying him about Harris interview on COVID-19 relief push