Tornado touches down in city of Arlington, Texas 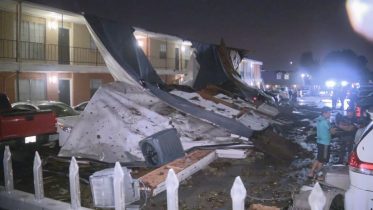 Residents in northern Texas are picking up the pieces after severe thunderstorms and a tornado blew through the region.

According to reports Wednesday, the National Weather Service confirmed a tornado touched down in the city of Arlington late Tuesday.

This came as a line of thunderstorms moved through the region in the evening hours, prompting severe weather watches and tornado warnings.

We are so saddened by the aftermath of the Arlington tornado last night that puts many folks without power, some with no car, or even no livable apartment unit for Thanksgiving.

Here is some video of that damage from last night in Arlington, Texas #txwxhttps://t.co/RnjPP3bhpn

Power lines, trees and buildings were knocked over with “significant damage” reported to several structures. The National Weather Service said it’s sending out a storm survey crew to determine the strength of the storm.

The American Red Cross is also assisting more than 80 families displaced after their apartment complexes were damaged in the storms.

Karin Kneissl: The US and Saudi Arabia have always had a messy alliance. How much is Biden prepared to shake it up?

AstraZeneca COVID-19 vaccine ‘not recommended’ in people 65 and older: NACI