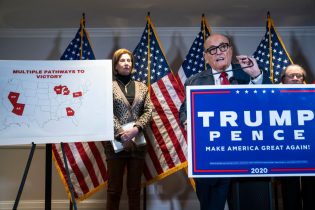 The Trump campaigned condemns election officials in Wisconsin for continuously failing to follow the law.

In a statement Friday, the campaign said, “Our democracy depends on fair and impartial elections that adhere to the Constitution and state statute.”

Trump campaign statement on the recount in Wisconsin pic.twitter.com/QJmQYcNaqe

The statement also noted Wisconsin’s last-minute attempt to change the rules is unlawful.

.@KayleighMcEnany on Wisconsin recount: The #Wisconsin election board is trying to change the recount laws because they see how strong our recount petition is pic.twitter.com/ji2WiJTDqv

This came as recount procedures in the state got underway Friday following a petition to do so from the president. The Trump campaign added when all of the legal votes are counted, President Trump will be proven the winner.

Becerra: I hope to find common ground on late-term abortions