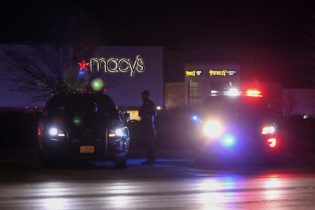 Police officers monitor the area outside the Mayfair Mall in Wauwatosa, Wisconsin, on November 20, 2020. – Multiple people were injured in a shooting at the US mall on November 20, according to local media, with victims rushed to hospital but no fatalities immediately reported. The FBI and the Milwaukee County Sheriff’s office tweeted that their officers were on the scene at the Mayfair Mall in Wauwatosa, Wisconsin, supporting the “active” response by local police. (Photo by KAMIL KRZACZYNSKI / AFP) (Photo by KAMIL KRZACZYNSKI/AFP via Getty Images)

At least eight people were injured after a gunman opened fire at a Wisconsin mall.

A manhunt is underway for a man in connection with a mall shooting in Wauwatosa, Wisconsin. On Friday, several people were wounded after the suspect opened fire at the Mayfair Mall just seven miles west of Milwaukee.

Police said they responded to calls that claimed shots were fired at the northeast entrance of the mall. The suspect is still at-large and was described as a caucasian male in his 20’s or 30’s.

Investigators are working tirelessly to identify and apprehend the suspect from yesterday’s shooting at Mayfair Mall. We ask that any witnesses to the incident please contact the Wauwatosa Police Department at 414-471-8430.

The extent of the victims’ injuries is unknown, though there have been no reported fatalities thus far.

Webber added that seven injured adults and one injured teenager were transported to the hospital by the Wauwatosa Fire Department.

Authorities said the mall remains an active crime scene and is closed for business on Saturday. The Wauwatosa Police Department urges the public to stay away from the area until further notice.