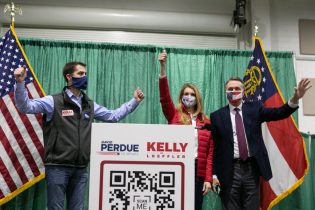 According to reports, the ‘Senate Leadership Fund’ is spending $35 million to support Sen. David Perdue’s (R-Ga.) re-election bid against Democrat candidate Jon Ossoff. In some of their latest ads, the group targeted Ossoff’s ties to China as well as his far-left ideals.

In the meantime, the PAC ‘American Crossroads’ is spending $35 million to help Sen. Kelly Loeffler (R-Ga.) in her race against Democrat candidate Raphael Warnock.

Warnock came under fire for resurfaced footage in which he claimed: “You cannot serve God and the military.” Both Republican candidates in Georgia condemned Warnock’s statement, with Loeffler calling his comments “disgraceful.”

.@ReverendWarnock’s comments disparaging the men and women who serve our country & risk their lives to defend freedom are disgraceful. https://t.co/7TBBv9ZJwA #gapol #gasen

However, this is only the tip of the iceberg as a recent campaign ad sponsored by ‘American Crossroads‘ took aim at Warnock for his reported association to the ‘Defund the Police’ movement.

“Raphael Warnock is a radical who compared police officers to gangsters and thugs,” the campaign ad said. “That’s why far-left defund the police extremists are flocking to Georgia because he’s one of them.”

This came as Republican PACs dropped a total of about $80 million on Georgia’s GOP Senate candidates, which included $9 million spent on radio and television advertisements.

All sides are spending heavily in the crucial elections with Republicans hoping to maintain a solid majority in the Senate. The run-off elections are set to take place on January 5.