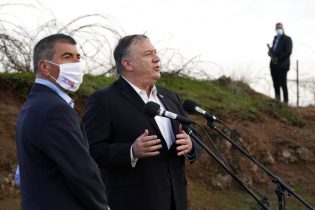 Secretary of State Mike Pompeo recently denounced boycotts being held against Israel by labeling them as anti-Semitic.

While holding a joint press conference in Israel Thursday, the U.S. official denounced the targeted practice against Israel known as the Boycott, Divestment, and Sanctions (BDS) movement.

The BDS movement began in 2005 as a non-violent protest against Israeli policies towards Palestinians. However, Israel sees the movement as a threat to its state that seeks to strategically damage its security and economy.

Proud to support American policy and stand with our great ally Israel. New guidelines outlined today protect Israeli producers and put the United States, and the world, on track towards recognizing reality. https://t.co/AlMHGPY7WF

Secretary Pompeo said the U.S. sides with Israel over the matter and is going to crackdown on the practice.

“We will regard the global anti-Israel BDS campaign as anti-Semitic,” he stated. “I want you to know we will immediately take steps to identify organizations that engage in hateful BDS conduct and withdraw U.S. government support for such groups.”

Moving forward, Israel has the legal authority to ban foreigners with ties to the BDS movement.

Republicans rally in support of party candidates in Ga. runoffs

One year later: Why Canada’s COVID-19 crisis is being called a ‘senicide’

Family hoping $20,000 reward entices someone to give information about missing dog

Relieved that venues may soon open, cultural promoters remain worried about the curfew