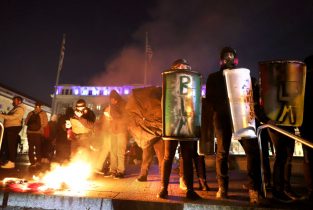 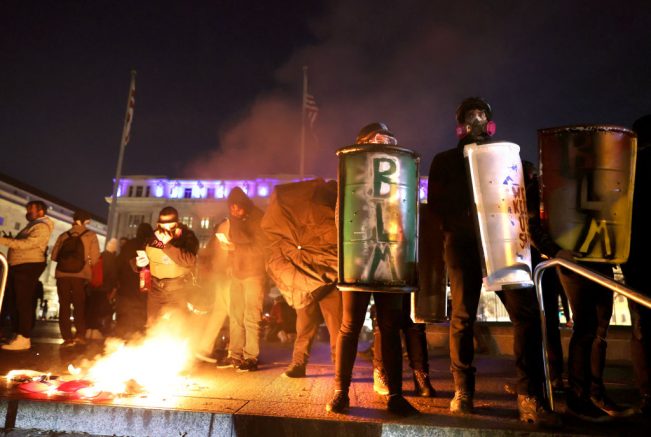 Counter-protesters hold shields as they stand next to a small fire during a protest following the “Million MAGA March” from Freedom Plaza to the Supreme Court, on November 14, 2020 in Washington, DC. Supporters of U.S. President Donald Trump gathered to protest voter fraud. (Photo by Tasos Katopodis/Getty Images)

As Trump supporters turned out in Washington D.C. to rally for the President, radical left rioters turned what was a peaceful protest into a violent clash.

Several videos captured just one of the attacks on a Trump supporter Saturday. The footage showed an unnamed man surrounded by alleged Antifa members before he was sucker-punched from behind, while he tried to fend off attacks from several people.

BLM-antifa thugs are running around and beating people on the streets in DC. Video by @VenturaReport: pic.twitter.com/GzV5HRN3So

Two counter-protesters were also seen stomping on his neck and head as he lay on the ground before snatching his phone. Other videos also captured the harassment and threats the man faced as he tried to walk away.

BLM-antifa assault older man trying to leave the area after the #MillionMAGAMarch. pic.twitter.com/S26myo9bgk

President Trump took to Twitter to denounce the violence on the streets of D.C. and commented specifically on this attack. He said those responsible were arrested.

Human Radical Left garbage did this. Being arrested now! https://t.co/fXSsXXp5yc

ANTIFA SCUM ran for the hills today when they tried attacking the people at the Trump Rally, because those people aggressively fought back. Antifa waited until tonight, when 99% were gone, to attack innocent #MAGA People. DC Police, get going — do your job and don’t hold back!!!

This followed a series of tweets by the President that slammed Antifa as well as the capitol’s mayor.

Radical Left ANTIFA SCUM was easily rebuffed today by the big D.C. MAGA Rally crowd, only to return at night, after 99% of the crowd had left, to assault elderly people and families. Police got there, but late. Mayor is not doing her job!

Additionally, the radical left mobs did not stop at those who tried to fight back but also went after those who were trying to peacefully leave once violence broke out.

Young couple in DC followed by crowd of BLM-antifa thugs who hit them and throw liquid on them. #MillionMAGAMarch pic.twitter.com/Lqo4evvviK

Another demonstrator was stabbed in the back, which left him hospitalized, while alleged Antifa members burned American flags in the streets.

Meanwhile, President Trump took aim at the mainstream media for not covering the violent attacks on his supporters. He said the silent media is the enemy of the people.

The Silent Media is the Enemy of the People!!! https://t.co/I2LnE3dpI9

John Cox: Gov. Newsom using stimulus to buy his way out of recall