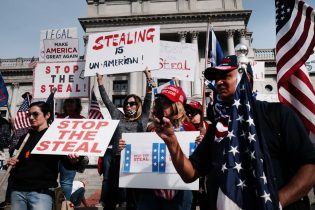 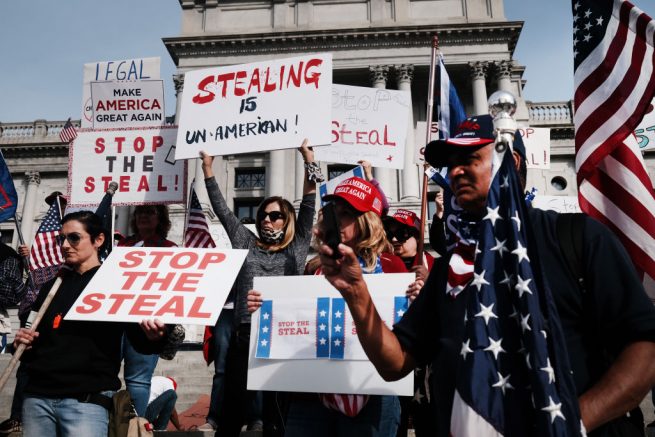 Dozens of people protesting in Pennsylvania due to voter fraud against President Donald Trump gather on the steps of the State Capital on November 05, 2020 in Harrisburg, Pa. (Photo by Spencer Platt/Getty Images)

President Trump is doubling down on his condemnation of ‘Dominion Voting Systems,‘ the electronic voting company accused of enabling voter fraud.

In a tweet Thursday, the President quoted a report by One America News that revealed how ‘Dominion’ deleted 2.7  million votes for him nationwide.

The President also took to Twitter Wednesday to mention “Dominion attempted to alter our election and got caught.”

It attempted to alter our election and got caught? https://t.co/J8mcH4SpxG

‘Dominion Voting Systems’ is the second-largest voting equipment vendor in the U.S. and provided its computer equipment in key battleground states. However, these systems appear to be unreliable.

“This image-cast evolution voting machine has the physical ability to mark votes onto the ballot after the last time the voter sees the ballot… and that’s a DISASTER. “

According to an un-audited analysis of data obtained from ‘Edison Research,’ states using ‘Dominion Voting Systems’ may have switched as many as 435,000 votes from President Trump to Joe Biden.

“According to an unaudited analysis of data from Edison Research, states using Dominion voting systems may have switched 435,000 votes from Trump to Biden. Another 2.7 million Trump votes appear to have been deleted by Dominion.” pic.twitter.com/IFPjEqODYI

Analysts said the theft and destruction of votes are attributed to so-called “glitches” in the ‘Dominion’ software and the extent to which this affected results can be verified by hand recounts of votes in each state.

#Developing: The #DominionVotingSystems that “glitched” in favor of Joe Biden (and was used in 29 states), partnered up with Clinton Global Initiative and had on staff former employees of both Clinton Growth Initiative and Clinton Cash Cow TENEO.