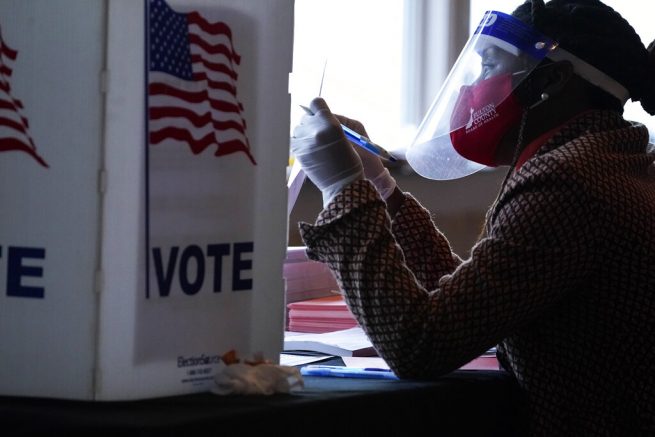 A poll worker talks to a voter before they vote on a paper ballot on Election Day in Atlanta on Tuesday, Nov. 3, 2020. (AP Photo/Brynn Anderson)

Investigations are underway in key battleground states after widespread allegations of voter irregularities started to spread.

In Georgia, where the race has been too close to call through the weekend, congressman Doug Collins is leading the recount after claims of ballot dumping and a lack of transparency with the original tabulation.

Two counties, Fulton and Gwinnett, reported technical issues during counting, which led officials to question the veracity of the unofficial tally.

Meanwhile on Sunday, the President’s team said Nevada had at least 200,000 votes that were not signature matched by both a machine and a human being as required by law. Additionally, state officials were notified of two cases were ballots were allegedly cast by residents who were deceased at the time of the election. 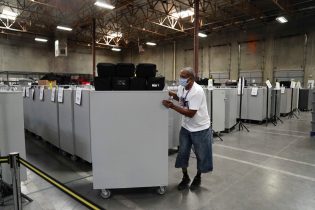 On Saturday, the Registrar of Voters for Nevada’s Clark County, Joe Gloria, said he had begun logging reports in preparation for a full investigation. Gloria could not confirm whether election officials cross-referenced active voter lists with lists of deceased voters from the Social Security Administration.

The two isolated cases involve improperly filled ballots with one appearing to be cast by a family member. Clark County has been at the center of controversy over the last week after Nevada’s secretary of state filed a lawsuit over “voting irregularities” in the county.

#BREAKING: Nevada officials investigating two cases of deceased voters casting ballots in Clark County, the I-Team confirms. One ballot appears to have been cast by a family member. The other remains under investigation, but deceased voter’s signature matched. #8NN #NVelection

When the Associated Press called the election in Nevada for Joe Biden, the President reportedly trailed Biden by 11,787 votes. This is less than a percentage of voters in the Silver State.

Investigations in both states are ongoing.

RELATED: Alleged examples of voting fraud pouring in despite Democrats insistence of no such thing