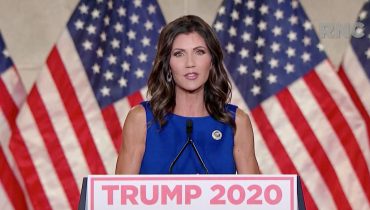 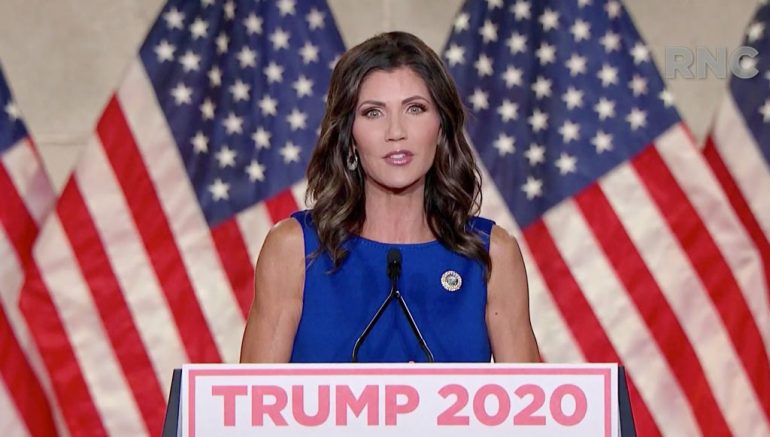 South Dakota Gov. Kristi Noem. (Photo Courtesy of the Committee on Arrangements for the 2020 Republican National Committee via Getty Images)

During an interview Sunday, Noem said celebrations for Biden are premature because we are not done counting votes for the presidential race.

She cited the recount during the Gore v Bush race in 2000 and said President Trump deserves his “day in court” amid his campaign’s legal action in multiple battleground states.

Pressed by @GStephanopoulos on whether she has any evidence to support Pres. Trump’s election claims, GOP North Dakota Gov. Kristi Noem does not provide any evidence, but also refuses to acknowledge that Joe Biden as the apparent winner of the presidency. https://t.co/RxWyF4Jwuf pic.twitter.com/VMNUeml0On

“People have signed legal documents… affidavits stating they saw illegal activity,” Noem said. “That is why we need to have this conversation in court. The New York Times itself said there were clerical errors. We had in Michigan Republican votes that changed to Democrat votes. in Pennsylvania why is everybody so scared just to have a fair election and find out?”

Noem said it is important to give the more than 70 million Americans who voted for President Trump peace of mind that the results of the election are legitimate.

MORE NEWS: President Trump: The Election Is Far From Over

Iran touts new missile base amid soft stance by Biden

GOP delegation calls on Biden to take action at border