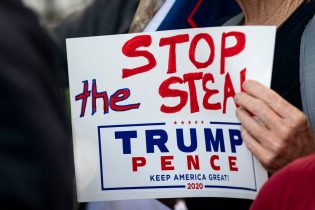 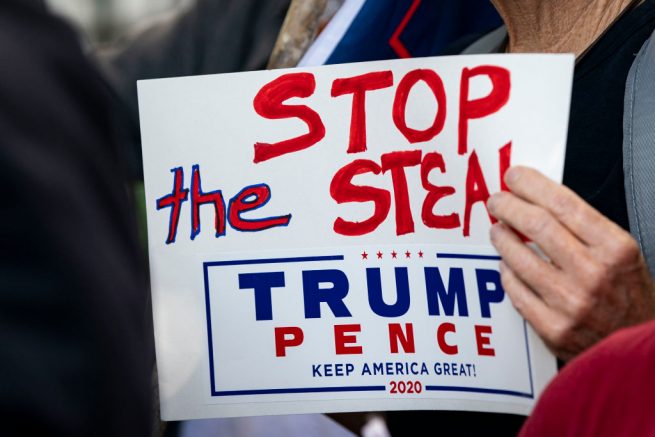 A woman holds a sign supporting U.S. President Donald Trump during a news conference outside the Republican National Committee headquarters on Capitol Hill, on November 5, 2020 in Washington, DC. (Photo by Al Drago/Getty Images)

The President’s campaign has prepared to file lawsuits in several states to demand a recount of 2020 ballots. 2020 marked the highest voter turnout in presidential election history and counting the more than 159.8 million ballots has become a source of massive contention.

While some states were called early, such as liberal strongholds like California and New York, along with much of the historically red “deep south” like Mississippi, Alabama and Arkansas, others were nearly too close to call.

By Wednesday evening, three suits had been filed on behalf of the President in Pennsylvania, Georgia and Michigan as well as additional demands for a recount in Wisconsin. Should the suits move forward, the potential for recounts in all four states will delay results for weeks as each state has maintained different policies in the event of a contested election.

The Bureau of Elections in Michigan said a recount can be filed if a candidate possesses a “good-faith belief that they would have had a reasonable chance of winning the election.”

The President’s campaign has until next Tuesday to file for a recount and would have to pay anywhere from $25 to $250 per voting precinct in order to begin the process, which must be completed within 30 days.

In Pennsylvania, a recount must record the more than 6.2 million ballots in a different manner in which they were first tabulated or the state must count paper ballots by hand. The latter method is further complicated by the fact that Pennsylvania does not require a voter-verified paper audit trail, which is used to verify the results of a recount.

Pennsylvania does allow for partial recount requests, which may happen in Philadelphia, where officials were still tallying the 350,000 mail-in ballots received through Wednesday night.

Georgia has maintained that a recount can only be demanded if the margin between candidates is less than one percent or if there are allegations of discrepancies in the results. While the President is currently ahead in the Peach State, it’s been alleged that election officials have added potentially invalid absentee ballots to counting pools. This may give Biden an advantage.

The only state currently under direct threat of a recount, Wisconsin, also requires a less than one percent difference. This was the case when the Associated Press called Wisconsin for Democrat nominee Joe Biden as they reported the President was behind by only 0.9 percent.

Wisconsin is one of the only states to have held a state-wide recount since 2000 when Green Party candidate Jill Stein demanded one in 2016, only to extend President Trump’s lead in the Badger State by 844 votes.

Regardless of how the President’s campaign decides to move forward, states will only have until December 14th to complete a recount before the electoral college meets to officially elect the President.

MORE NEWS: Tense Confrontations Break Out In Mich. Amid Calls For Recount