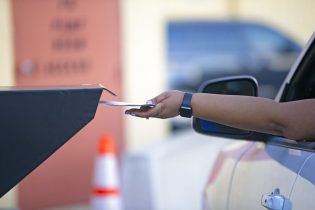 As Americans are expected to flood polling stations on election day, many may be puzzled to know they do not directly vote for a presidential candidate.

On Tuesday, Americans will vote for state electors in the electoral college instead who will then cast a vote for the president.

48 states and Washington, D.C. all have a winner take all system, where electors cast their vote based on which candidate wins the most votes in the state.

“The people vote on November 3rd for electors. When California votes, it’s voting for a number of electors. When New York votes, it’s ready for the number of electors from Texas and Florida and Michigan vote. They’re voting for individual electoral slates who tend to support President Trump or President Biden.” Justin Levitt, professor at Loyola Law School

The electoral college is made up of 538 electors total, which are divvied up to each state by the number of representatives in the House and Senate. For example, California has 55 total electoral votes, Florida has 29 and Pennsylvania has 20.

Each candidate must win at least half of the electors plus one, which comes out to at least 270 votes.

{SOT 2}
“Most people don’t know who their electors are, but they are real people. They are, in fact, people who have already been chosen by their political party. And those slates of electors are waiting until the decision on the popular vote in the state.”

The system was based on former President James Madison’s Virginia Plan at the 1787 Constitutional Convention. The plan called for congressional representation to be made up by a state’s population and later revised to give Congress the power to choose electors.

It wasn’t until the U.S. Constitution was written that the authors gave the power to choose electors to the states.

{SOT 3}
“We determine the World Series winner on the basis of which team won four games. It doesn’t matter whether they won one game by a lot or they won one game by only one run. The reality is, if you won, you won. And so our Electoral College is somewhat like that. There are fifty one simultaneous games that are happening on Election Day. And we have fifty one because we include the District of Columbia.” Lara Brown, associate professor – George Washington

Several Americans have condemned the electoral college system in recent history… as two-republican candidates — former president George W. Bush in 2000 and President Trump in 2016 — beat out their Democrat competitors who won the popular vote.

This hadn’t happened since 1888 when former President Benjamin Harrison beat former President Grover Cleveland in the electoral college even though he lost by more than 90,000 in the popular vote.

Meanwhile, President Trump and his Democrat rival Joe Biden are competing for at least 270 electoral votes to win the presidency on Election Day.

Then the electoral college will reconvene in the middle of December to finalize their votes for the president.