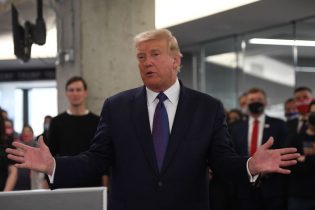 According to reports, President Trump is off to an early lead in New Hampshire after two small towns counted their ballots.

On Tuesday, the town of Millsfield voted for President Trump over Democrat nominee Joe Biden in a 16 to five vote.

Meanwhile, the nearby town of Dixville Notch voted for Biden with a five-to-zero majority which left President Trump leading by six votes.

As soon as the clock strikes midnight, voters in #DixvilleNotch will fill the historic ballot box with their votes for the 2020 General Election. #midnightvote #NHpolitics #FITN #ElectionDay #DixvilleVote #Election2020 pic.twitter.com/TuHG9ejTIn

This came as the towns have a long tradition of counting the votes at midnight on Election Day, making them the “first in the nation” to know the election results for their region.