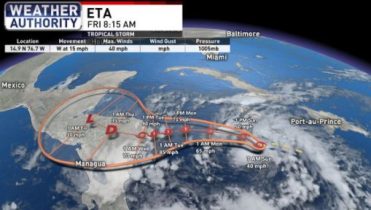 Tropical storm Eta has been named the 28th storm of this year’s hurricane season as it heads toward Central America. Eta is expected to make landfall in Nicaragua on Tuesday and currently has sustained winds of 40 miles per hour.

#Eta has formed in the central Caribbean – the 28th named storm of the 2020 Atlantic #hurricane season to date. 2020 has now tied 2005 for the most named storms to form in the Atlantic in a single season on record. pic.twitter.com/Ntmn0e3rYj

Upgraded from tropical depression 29, Eta has tied the record of named storms in a season, which was set in 2005.

Tropical Storm #Eta is now forecast to become a strong category two hurricane near landfall along the coast of Nicaragua. Tropical Storm conditions are forecast to arrive around 2pm EST tomorrow and storm preparations should be rushed to completion in the Hurricane Warning area. pic.twitter.com/r76ytncy30

The tropical storm could be upgraded to a category one hurricane if it gains strength quickly as it moves westward. Flash flooding may occur in Jamaica, Cayman Islands, and Central America as Eta has continued to bring heavy rainfall.