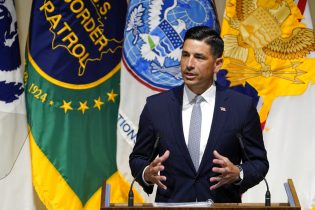 .@DHSgov’s Center for Countering Human Trafficking will further advance our continued role in investigating and preventing all forms of human trafficking, exploitation, and forced labor. pic.twitter.com/HBtX5qdXTL

Wolf also noted the DHS will look into cases of domestic servitude, sexual exploitation and forced labor of foreign persons on U.S. soil.

“No more to the victimization of innocent people through forced labor, no more to the gross abuse of human rights and dignity resulting from this despicable crime,” stated the secretary. “The launch of the DHS Center for Countering Human Trafficking represents the investment of resources, attention, and time by this administration to combat and dismantle all forms of human trafficking.”

The DHS is now ramping up efforts to break-up circles of illegal immigration and investigate possible commercial and political interests in that process.

Miller: President Trump is going to hold all the Sunbelt states