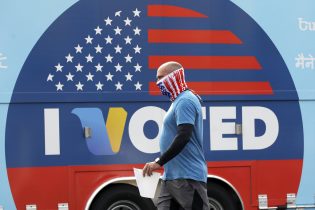 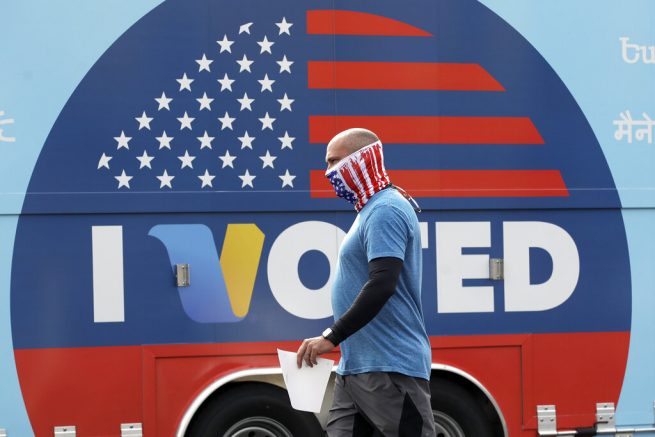 FILE – In this May 12, 2020 file photo, Robb Rehfeld wears a mask as he walks to cast his vote during a special election for California’s 25th Congressional District seat in Santa Clarita, Calif. (AP Photo/Marcio Jose Sanchez, File)

Millions of California voters have turned in their mail-in ballots early amid an intense election cycle.

In Orange County, the ballot count within the first few days of early voting was up by 400 percent compared to four years ago. On Tuesday, Registrar of Voters Neal Kelley stated tens of thousands of ballots are already being scanned and sorted by machines.

“What you’re seeing here are the ballots that are coming in from mail or drop boxes and these ballots, the first stop they make is this device which captures the signature of the voter and then we make the comparison to the voter’s signature on file and then we open the ballot if it’s eligible,” he explained. “The volume you’re seeing in these trays is about 20,000 higher than it was four years ago, so it’s significantly higher in volume.”

Kelley, who has been involved in the voting process for five elections, said this year’s voter engagement has been through the roof. Despite early voter turn out, however, authorities are not allowed to begin processing the votes until election night.

“We do everything, but tally the votes — I can’t do that until election night,” said Kelley. “So we hold the data in suspense and it’s in multiple databases, and then we fuse it all together on election night to produce the results.”

When it comes to election interference, Kelley said district attorneys in the area will help election officials enforce the law and mitigate any issues that arise.

“I think one of the things to point out is that, you know, elections have a lot of moving parts, and so it’s our job as election officials to try and plug those vulnerabilities,” he explained. “…to plug those holes and to have a good response system in place because things can go wrong.”

This comes as critics of mail-in voting, including President Trump, have said the process is ripe for fraud. On Saturday, a nonpartisan voting watchdog group called the Election Integrity Project sent the California secretary of state a letter notifying him of 440,000 questionable mail-in ballots.

According to the letter, the state sent ballots to voters who have likely died or moved in the last decade. The report notes these individuals have been inactive for up to 20 years yet are still considered active voters.

Meanwhile, thousands more California voters have received two or more ballots due to individuals being inaccurately registered in multiple places in the state.

Conservatives respond to Twitter’s ban on the President

Welcome to Snitch Nation: From kids to parents, it’s a race to rat out your (former) loved ones before they get you first