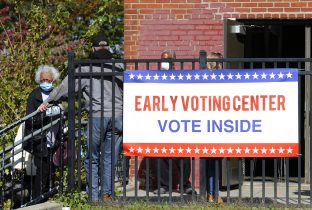 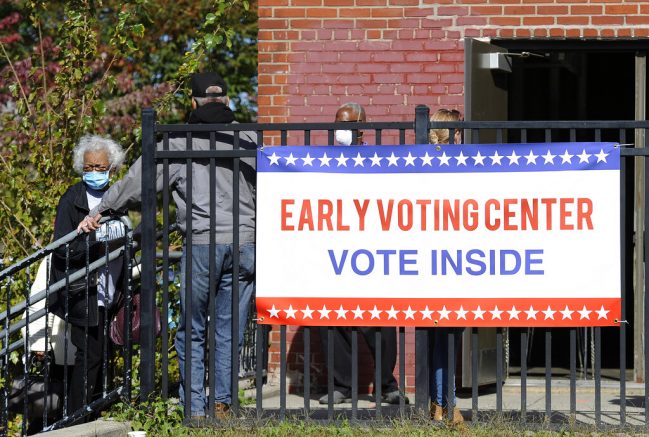 FILE – In this Oct. 15, 2020, file photo, voters line up at an early voting satellite location at the Anne B. Day elementary school in Philadelphia. (AP Photo/Michael Perez, File)

Millions of voters have showed up at the polls and sent in their mail-in ballots in what’s being called an “unprecedented” early voting turnout. Concerns about the coronavirus and mail-in voting have been cited for the remarkable turnout.

According to recent reports, more than 21 million voters have cast their ballots either in person or through the mail so far. Around 1.4 million people had already voted by this time during 2016, accounting for more than 15 percent of the total votes during that election.

The Georgia state secretary said nearly 130,000 people cast ballots in the state Monday, smashing the nearly 91,000 votes cast on the first day of the 2016 election. One county said it saw a 484 percent increase from the first day of voting.

Georgia voters expressed a sense of urgency driving them to the polls, saying this election seems to be more complex due to the ongoing pandemic and the candidates.

“I would strongly recommend coming early and getting it done, that way you know it’s done,” stated Georgia resident Steve Butts. “It’s in the system, you don’t have to hear about it on the 6:00 o’clock news about ‘they found a burlap bag full of ballots’ in, you know, out in the woods somewhere.”

In Texas, where early voting started Tuesday, more than 1 million votes have already been cast in a record turnout. Nearly 17 million Texans registered to vote this year, which is up nearly 2 million since 2016.

In Ohio, nearly 200,000 residents cast early votes this week compared to around 64,000 during the same week in the last election.

Meanwhile in North Carolina, voters waited for up to three hours to cast their ballots in some areas when early voting started Thursday.

It’s a beautiful day, people are eager to vote,” said North Carolina resident Jason Roberts. ” If you wait and go next week, I think you’ll see the lines will not be nearly as long as they are today and it will be a much faster process for someone who doesn’t have the time to stand outside.”

According to reports, the number of first time voters choosing to vote early has more than doubled compared to 2016. More than 2 million infrequent voters have also cast ballots compared to 658,000 during the last election.

Officials said the steps taken by states to make it easier to register to vote and cast a ballot likely contributed to the increased turnout. In Virginia, for example, voters can now vote absentee without having to provide a reason and lawmakers have made Election Day a state holiday.

Registered Democrats are reportedly “significantly” outnumbering Republicans in this early turnout and have returned nearly 2.5 million more ballots. However, GOP officials said they are not concerned while pointing out a majority of Republican voters prefer to vote in person, especially on Election Day.

“This is a pattern we are seeing across other states as well — that Democrats in particular are very motivated to turnout, but they are also very motivated to either vote by mail or vote early,”stated Seth Masket, Director of the Center on American Politics, University of Denver. “There is a good deal of enthusiasm among Republicans as well, they are more interested in voting close to or on Election Day.”

One expert who tracks polling data said Democrats may be doing Republicans a favor by voting early thus clearing out polling places for Republicans to vote come Election Day.