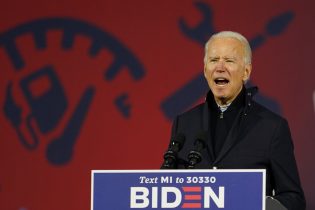 Presidential hopeful Joe Biden is turning his back on the Green New Deal. He announced his own plan to combat so-called climate change during a Thursday night town hall with ABC News.

The former vice president wants to the U.S. reach net-zero emissions by 2050, starting with the electric sector hitting it’s first goal by 2035. Some economists worry Biden’s proposed plan will be devastating to taxpayers.

One report even suggested his plan could cost American taxpayers over $6 trillion a year. However, voters seem hesitant to trust the ideas he has proposed, primarily because he has changed his mind on this issue in the past.

During Thursday’s event, Biden made it clear that he does not support a ban on fracking.

“Well first of all, I make it clear I do not propose banning fracking,” he stated. “I think you have to make sure that fracking is, in fact, admitting methane or polluting the…well dealing with what can be a small earthquake and how they’re drilling, so it has to be managed very very well.”

During a primary debate in July of last year, however, he said there was no place for fracking in a Biden administration.

One prominent union leader, Shawn Steffee, also criticized Biden’s inconsistent messaging while arguing the Biden campaign has vowed to end fossil fuels, but has supported fracking. This suggests the Democrat doesn’t understand the logistics of the plan he is advocating as fracking is a process used to extract fossil fuels.

President Trump, who has repeatedly supported the use of safe fossil fuels, warned against a Biden presidency.