President Trump: We will have health care, which is far better than Obamacare 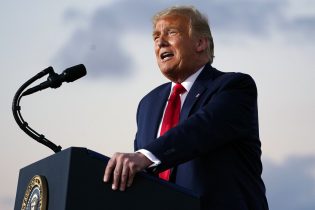 President Trump is determined to provide all Americans with superior health care coverage than what Obamacare affords them.

While taking to Twitter Monday, the President noted that health care costs will be far lower and people with preexisting conditions will be protected at an even higher level than now.

We will have Healthcare which is FAR BETTER than ObamaCare, at a FAR LOWER COST – BIG PREMIUM REDUCTION. PEOPLE WITH PRE EXISTING CONDITIONS WILL BE PROTECTED AT AN EVEN HIGHER LEVEL THAN NOW. HIGHLY UNPOPULAR AND UNFAIR INDIVIDUAL MANDATE ALREADY TERMINATED. YOU’RE WELCOME!

In a separate tweet, he said Republicans must state loudly and clearly that they are going to provide health care at a much lower cost. The President also noted that Republicans will always protect pre-existing conditions.

Republicans must state loudly and clearly that WE are going to provide much better Healthcare at a much lower cost. Get the word out! Will always protect pre-existing conditions!!!

“I believe the reason you ( Judge Amy Coney Barrett) were chosen is precisely because your judicial philosophy, as repeatedly stated, could lead to the outcomes President Trump has sought,” claimed Sen. Chris Coons (D-Del.). “And I think that has dramatic and potentially very harmful consequences with regards to the election, the Affordable Care Act and long settled rights.”

However, Republicans did not let their colleagues accusations go unrefuted.

“Several of my colleagues have engaged in fear mongering and describe Judge Barrett’s nomination as an end to health care, abortion rights, labor rights and the list goes on and on and on,” stated Sen. Thom Tillis (R-N.C.). “These statements are unfair and they’re untrue. ”

“One of the pre-selected scare tactics is that Judge Barrett is out to steal Americans’ healthcare coverage, that’s the claim,” he noted. “This mother of seven, including multiple children who were born or adopted facing pre-existing medical challenges, is just itching to block families like hers from accessing medical care — what a joke.”

Regardless if Obamacare is invalidated by the high court or not, the President has already taken action to address some areas of concern. He signed an executive order called the America First Health Care Plan back in September.

The order unequivocally affirms that it’s U.S. policy is to give Americans seeking health care more choices lower costs and better care. It also notes U.S. policy includes ensuring Americans with pre-existing conditions can get the insurance of their choice at affordable rates.

With the election rapidly approaching, the issue of health care will likely remain a top concern for lawmakers and voters alike. A recent Gallup poll found reducing the cost of health care is one of the most important issues for Americans when it comes to determining their vote for president in the 2020 election.

Calif. firefighter sets fire to own home after opening fire on co-workers