O’Brien: Vice President Pence will not need to take over while President Trump recovers from COVID-19 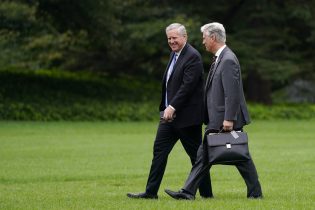 White House chief of staff Mark Meadows, left, and national security adviser Robert O’Brien walk on the South Lawn of the White House in Washington, Thursday, Sept. 24, 2020, before boarding Marine One with President Donald Trump for a short trip to Andrews Air Force Base, Md. Trump is traveling to North Carolina and Florida. (AP Photo/Patrick Semansky)

According to National Security Advisor Robert O’Brien, it is not on the table for Vice President Mike Pence to take over at the White House at this time.

On Sunday, he emphasized it is unnecessary because President Trump is doing very well.

O’Brien made it clear the President is still doing work from the medical center and that they expect to hold a security briefing with him later on.

“General Milley, Secretary Pompeo and myself will be giving him a national security brief this afternoon from the White House,” stated the adviser. “He’ll be here at Walter Reed, so we’ll do it by secure video conference or phone.”

He added he does not need address hypotheticals because the federal government has a plan and is doing well. He reiterated President Trump is firmly in command of the American government.