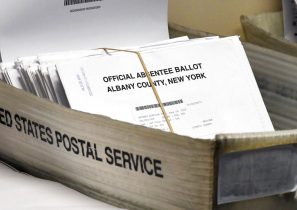 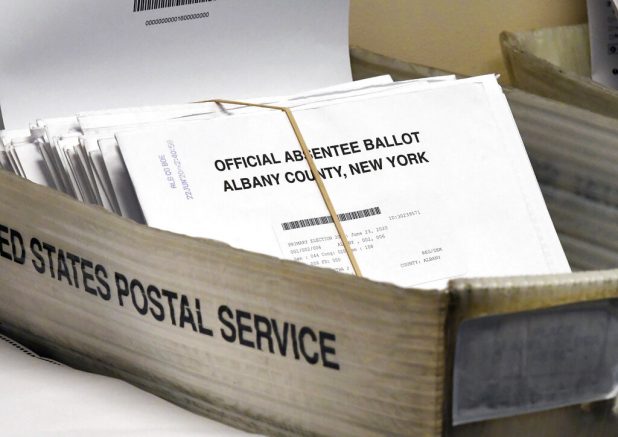 FILE – In this June 30, 2020, file photo, a box of absentee ballots wait to be counted at the Albany County Board of Elections in Albany, N.Y.  (AP Photo/Hans Pennink, File)

New York City officials are in hot water following a recent absentee ballot mishap. The city’s Board of Elections addressed the issue in a Twitter post earlier this week, informing residents who to contact if they received a faulty ballot.

The mistake was discovered as voters in the area received their mail-in ballots, which included the wrong names and addresses listed on their return envelopes. This could be a serious problem for voters, as ballots with signatures that do not match up with the name on the envelope are thrown out.

New York City also encountered another misprint with their absentee ballot headings. The heading of the ballot left out a slash between “official absentee” and “military ballot,” which led many voters to believe they had received a ballot intended for military members only.

The election board has since responded by saying the misprint does not affect the validity of the ballot, which can still be used by voters who are not in the military.

A message from The NYC Board of Elections regarding all absentee ballots pic.twitter.com/RqmWfuym3l

Election officials blamed the ballot errors on Phoenix Graphics, a third party vendor responsible for printing and mailing the ballots. Board of Elections Director Michael J. Ryan has said the proper ballots will be in the hands of residents prior to Election Day.

It is unclear how many individuals received faulty ballots, but 140,000 have already been sent out across the borough. This came after some New York City residents reportedly did not receive their ballots on time for the primaries earlier this year.

Pa. judge rules late-arriving ballots shall not be counted