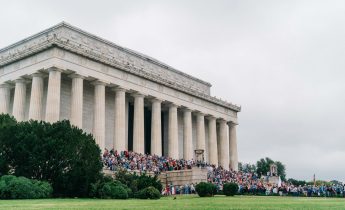 On Saturday, thousands of conservatives and evangelicals marched on Capitol Hill. They are calling for a spiritual awakening within the United States.

The 2020 Prayer March was organized by Reverend Franklin Graham, son of famous evangelist Billy Graham. He urged for spiritual healing across country in the wake of the recent national unrest.

Vice President Mike Pence even made an appearance at the beginning of the march. He praised those who joined in prayer and urged attendees to continue this “great American tradition.”

“Since the founding of our nation, the American people and our leaders have gone to prayer in challenging times,” he stated. “President Donald Trump has observed many times that America is a nation of believers, and you’ve proved that again today.”

.@SecondLady and I were truly honored to join @Franklin_Graham and thousands of Believers for the #PrayerMarch2020 in Washington DC today. Thank you for your prayers, America.

The two-hour march was slated to stop and pray at seven spots around Washington, D.C. It will reportedly end on the steps of the U.S. capitol.

Organizers have said this march is not meant to be political, but only asking for God to heal the country.

We started at the Lincoln Memorial and are praying at different stops as we approach the U.S. Capitol. I’m thankful for the thousands who came out to join us for #PrayerMarch2020 in Washington, D.C. You can watch #LIVE & pray with us here: https://t.co/ibSPJDBvRs