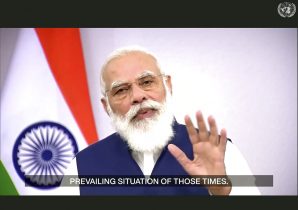 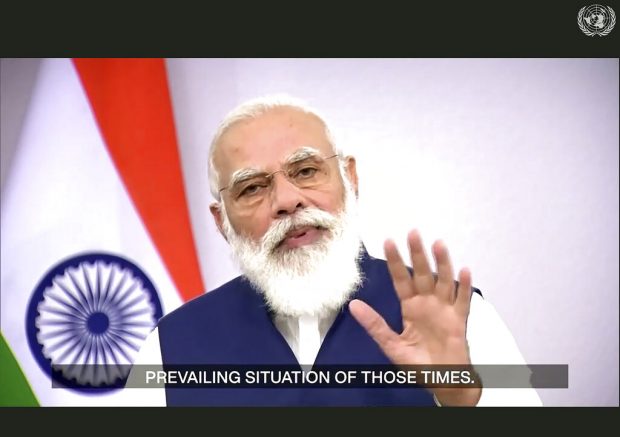 In this photo made from UNTV video, Narendra Modi, Prime Minister of India, speaks in a pre-recorded message which was played during the 75th session of the United Nations General Assembly, Saturday, Sept. 26, 2020, at UN Headquarters. (UNTV Via AP )

India’s prime minister has pledged his country’s vaccine production capacity will be made available to the world. In an address to the United Nations, Prime Minister Narendra Modi called India “the largest vaccine producing country in the world.”

He announced India is moving ahead with phase three clinical trials and promised the country’s help to all countries with the delivery of a vaccine.

“India’s vaccine production and delivery capacity will be used to help all humanity in fighting this crisis,” said Modi.

India has recorded nearly 6 million COVID-19 cases and a death toll of more than 90,000. The first dose of the vaccine, which was developed by Oxford University and AstraZeneca, will be administered to volunteers in a hospital in Mumbai.

Meanwhile, a second hospital is slated to start clinical trials on Monday. Volunteers will be given a second dose of the potential vaccine within 29 days.

Ivanka Trump rumored to run for senate in Fla.

NYC, Denver public libraries will continue to lend out all Dr. Seuss titles