Venezuela’s Maduro rails against U.S. in address to the UN 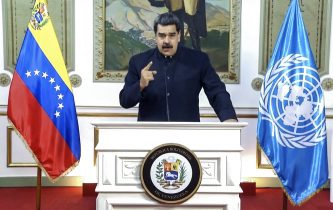 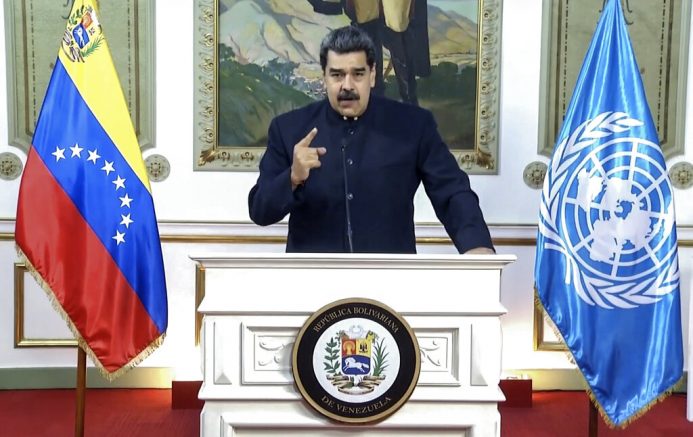 In this UNTV image, Nicolás Maduro Moros, President of Venezuela, speaks in a pre-recorded video message during the 75th session of the United Nations General Assembly, Wednesday, Sept. 23, 2020, at UN headquarters in New York. (UNTV via AP)

Embattled Venezuelan President Nicolas Maduro railed against the U.S. while claiming America is the most serious threat to world peace.

The South American leader, who stands accused of war crimes, made the remarks while addressing the United Nations Wednesday. He denigrated the U.S. by claiming Washington has committed criminal and inhuman acts of aggression toward his regime.

Today, after our 10-year campaign, investigators of the U.N. Human Rights Council finally found Venezuela guilty of crimes against humanity.

So why is Maduro still a member of this body? It’s absurd.

We demand the U.N. expel the criminal regime. Now.https://t.co/ljKHZsFm0B

Maduro also attacked dozens of other countries in his speech, all of which do not recognize him as the legitimate leader of Venezuela. Instead, the nations acknowledge his opponent Interim President Juan Guaido who responded to Maduro’s heated remarks by demanding he step down.

“Today, I call on all representatives of UN member states to assume responsibility in assisting the legitimate government of Venezuela in its mission to protect the people of Venezuela, to save Venezuela and to consider a strategy,” stated the opposition leader. “After all the steps taken, the time has come for timely and decisive action.”

Meanwhile, Maduro also called on other countries to oppose U.S. sanctions on his dwindling list of allies, which includes Syria, Cuba and Iran.