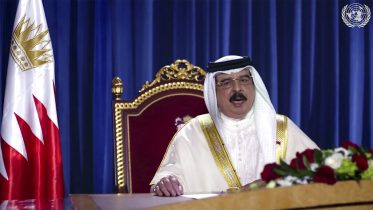 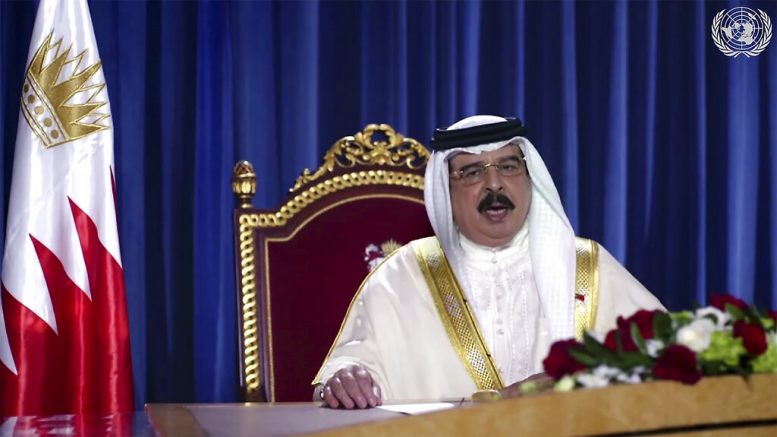 In this image made from UNTV video, King Hamad bin Isa Al Khalifa, of Bahrain, speaks in a pre-recorded message which was played during the 75th session of the United Nations General Assembly, Thursday Sept. 24, 2020, at UN headquarters. (UNTV via AP)

The King of Bahrain praised the recent peace accord with Israel and the United Arab Emirates. During his United Nations address Thursday, King Hamad bin Isa Al Khalifa said President Trump is advancing security and stability in the region.

The Bahraini King suggested the deal will end hostilities in the Middle East and said the normalization of relations with Israel will make regional affairs more civilized, peaceful and constructive.

Bahrain became the first third-party Arab nation to join the Israeli-Emirati deal, which was signed earlier this month. King Khalifa also noted that the deal will establish fair and comprehensive peace.

“This peace is the best guarantee for the future of all peoples of the region,” he stated. “The courageous step of the brotherly United Arab Emirates to rekindle hope in achieving peace and stability in the region is a successful and commendable step.”

The Bahraini King also gave his support for a Palestinian state with a capital in East Jerusalem while suggesting lengthy talks could be up ahead.

Sen. Graham says he will ‘lead charge’ on justice nomination