U.S. says U.N. sanctions on Iran to be reimposed Saturday. What does that mean? 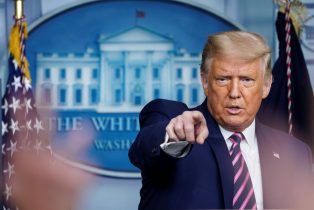 NEW YORK (Reuters) – U.S. President Donald Trump’s administration says that on Saturday (2000 EDT/0000 GMT Sunday) all United Nations sanctions on Iran have to be restored and a conventional arms embargo on the country will no longer expire in mid-October.

But 13 of the 15 U.N. Security Council members, including long-time U.S. allies, say Washington’s move is void and diplomats say few countries are likely to reimpose the measures, which were lifted under a 2015 deal between world powers and Iran that aimed to stop Tehran developing nuclear weapons.

Here is a look at the events leading to this showdown and an explanation of what could happen next:

WHY IS THE ARMS EMBARGO ON IRAN EXPIRING?

The Security Council imposed an arms embargo on Iran in 2007.

The embargo is due to expire on Oct. 18, as agreed under the nuclear deal among Iran, Russia, China, Germany, Britain, France and the United States that seeks to prevent Tehran from developing nuclear weapons in return for sanctions relief. It is enshrined in a 2015 Security Council resolution.

In 2018, Trump quit the accord reached under his predecessor Barack Obama, calling it “the worst deal ever.” The United States failed last month in a bid to extend the Iran embargo at the Security Council.

WHAT DOES THIS MEAN FOR THE 2015 NUCLEAR DEAL?

The remaining parties to the nuclear deal have said they are committed to maintaining the agreement. Iran has said it would remain in place despite the U.S. move at the United Nations.

Britain, France and Germany told the U.N. Security Council on Friday that U.N. sanctions relief for Iran would continue beyond Sept. 20.

“We have worked tirelessly to preserve the nuclear agreement and remain committed to do so,” the U.N. envoys for the three countries said in a letter to the Council, seen by Reuters.

WHAT SANCTIONS WOULD ‘SNAPBACK’?

A return of U.N. sanctions, a so-called snapback, would require Iran to suspend all nuclear enrichment-related and reprocessing activities, including research and development, and ban imports of anything that could contribute to those activities or to development of nuclear weapon delivery systems.

It would reimpose the arms embargo, ban Iran from developing ballistic missiles capable of delivering nuclear weapons and bring back targeted sanctions on dozens of individuals and entities. Countries also would be urged to inspect shipments to and from Iran and authorized to seize any banned cargo.

WHAT LED TO THIS SHOWDOWN?

The United States submitted a complaint about Iran breaching the nuclear deal to the Security Council last month.

In response to the U.S. quitting the accord and imposing unilateral sanctions in a bid to get Iran to negotiate a new deal, Tehran has breached central limits of the pact, including on its stock of enriched uranium

Under a 2015 U.N. Security Council resolution enshrining the nuclear deal, the United States says that it triggered a 30-day process leading to a snapback of all U.N. sanctions on Iran. Washington argues that while it quit the nuclear deal in 2018, the 2015 resolution still names it as a participant.

Under the sanctions snapback process if a Security Council resolution to extend sanctions relief on Iran is not adopted within the 30 days, then U.N. sanctions are supposed to be reimposed. No such resolution has been put forward for a vote.

Indonesia, the president of the Security Council for August, said last month that it was “not in the position to take further action” on the U.S. bid to trigger a return of all U.N. sanctions on Iran because there was no consensus in the body.

Thirteen of the 15 council members expressed their opposition, arguing that Washington’s move is void given it is using a process agreed under the nuclear deal it is no longer a party to.

WHAT WILL THE UNITED STATES DO NOW?

Trump plans to issue an executive order https://www.reuters.com/article/us-iran-usa-arms-exclusive/exclusive-trump-plans-executive-order-to-punish-arms-trade-with-iran-sources-idUSKBN268308?il=0 allowing him to impose U.S. sanctions on anyone who violates the U.N. arms embargo on Iran, sources told Reuters, in a bid to reinforce the U.S. assertion that the measure has been extended indefinitely beyond Oct. 18.

The sources, who spoke on condition of anonymity, said on Thursday that the order was expected in the coming days and would allow Trump to punish foreign actors – U.S. entities are already barred from trading weapons with Iran – by depriving them of access to the U.S. market.

Three senior Iranian officials have told Reuters that Iran’s leadership is determined to remain committed to the nuclear deal, hoping that a victory by Trump’s political rival Joe Biden in the Nov. 3 election will salvage the pact.

Biden, who was vice president when the Obama administration negotiated the accord, said he would rejoin the deal if Iran first resumed compliance.

“If Iran returns to strict compliance with the nuclear deal, the United States would rejoin the agreement and build on it, while working with allies to push back on Iran’s destabilizing actions,” Biden campaign spokesman Andrew Bates said.